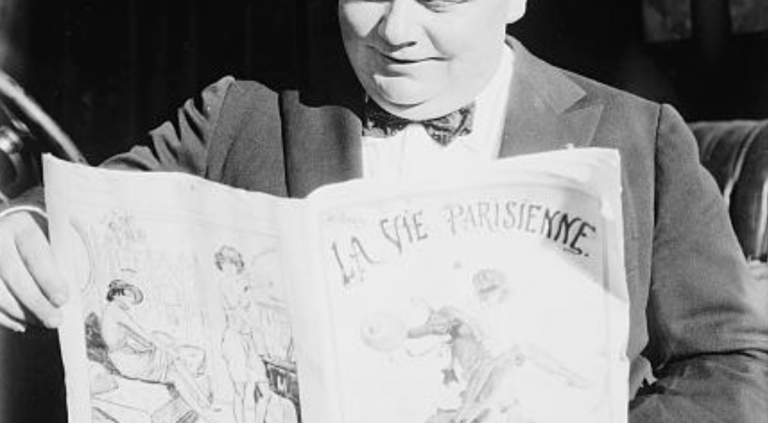 Letters Give an Intimate Look at Classic Hollywood Era

Filmmaker Rocky Lang was taken aback a few years ago when he learned of a letter his father, producer Jennings Lang, had written in 1939.

Lang the elder had just arrived in Los Angeles that year and was seeking a job from the famous literary agent H.N. Swanson. “It was amazing because when I saw the letter he was at the start of his life, and I could see his personality in that letter,” Lang told the Hollywood Reporter.

Later, his father represented Joan Crawford and Humphrey Bogart as an agent, and he produced movies including the “Airport” franchise, “Earthquake” and “Play Misty For Me.”

Howard Prouty, an archivist at the Academy of Motion Picture Arts and Sciences, sent the letter to Lang. After meeting Prouty and learning more about the academy’s archives, Lang realized his father’s letter was but one example in a vast trove of letters, telegrams, memos and other missives that, together, had the potential to offer a unique view of Hollywood history.

Lang teamed up with film historian and archivist Barbara Hall to collect some of these materials into a book. Last fall, the pair published “Letters from Hollywood: Inside the Private World of Classic American Moviemaking.” The collection includes correspondence from the academy and other repositories, including the Library of Congress. 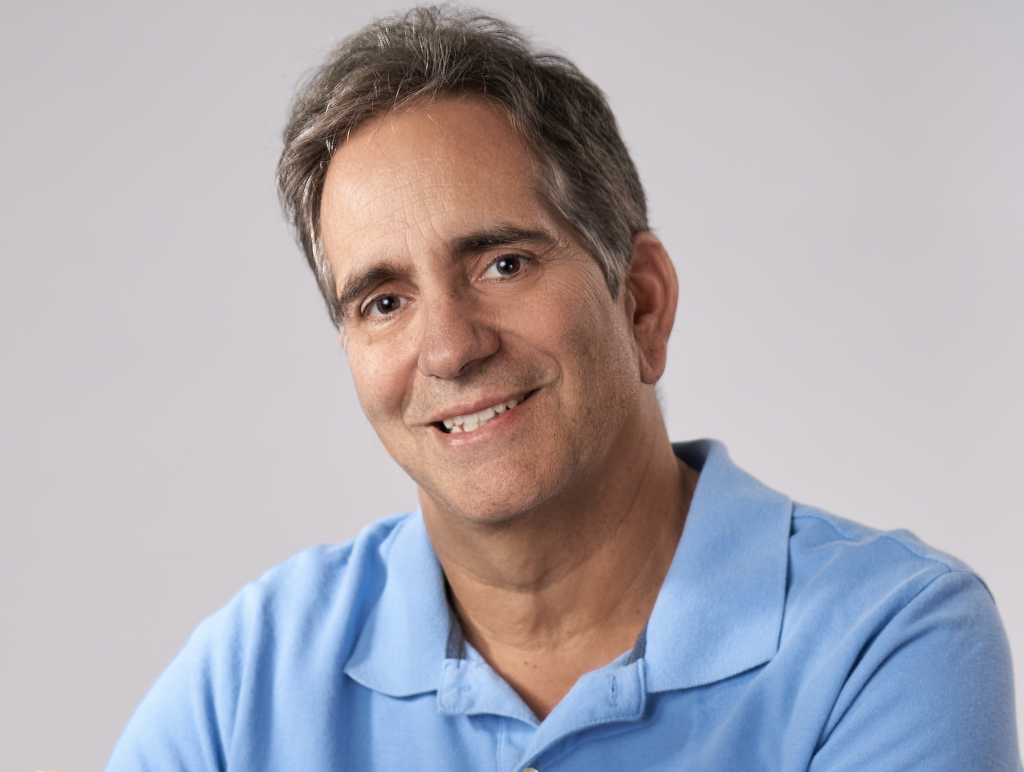 Here, Lang answers a few questions about his book and his research at the Library.

Tell us about “Letters from Hollywood.”
It begins in the silent era and runs until the mid-1970s and contains 137 letters from many of the icons of Hollywood and those behind the scenes. Barbara and I knew from the start we could not possibly include every major figure. But we tried our best to include a selection of letters that would take us through those decades of film history and offer insight into actors and filmmakers and their personalities. We began to look for letters that spotlighted the friendships, concerns, hopes and fears of the men and women who made Hollywood great. Some are revealing, some are hilarious and some are extremely thoughtful.

Describe a few standout letters.
All the letters are standouts in their own right. In a wonderful letter from famed gossip columnist Hedda Hopper to silent movie actress Aileen Pringle, Hopper writes that she had just seen “Citizen Kane.” She described it as a “foul” film and suspected it would flop. Cubby Broccoli, producer of the early Bond movies, recounts that United Artists felt it could do better than Sean Connery for Bond. And actor Gilbert Roland reminisces about his 1920s love affair with actress Clara Bow.

From the Library’s collections, there’s a letter from Groucho Marx to Jerry Lewis in which Marx humorously deflects praise for his work in a serious role by joking that dramatic acting is a racket that isn’t as hard as it looks

My favorite might be a letter to Sam Goldwyn from Robert Sherwood, the writer who would win the Academy Award for best adapted screenplay for “The Best Years of Our Lives.” Sherwood begs Goldwyn to let him out of his obligation to write the script, listing all the reasons the movie will fail. Goldwyn of course made the film, and the movie was incredibly successful. 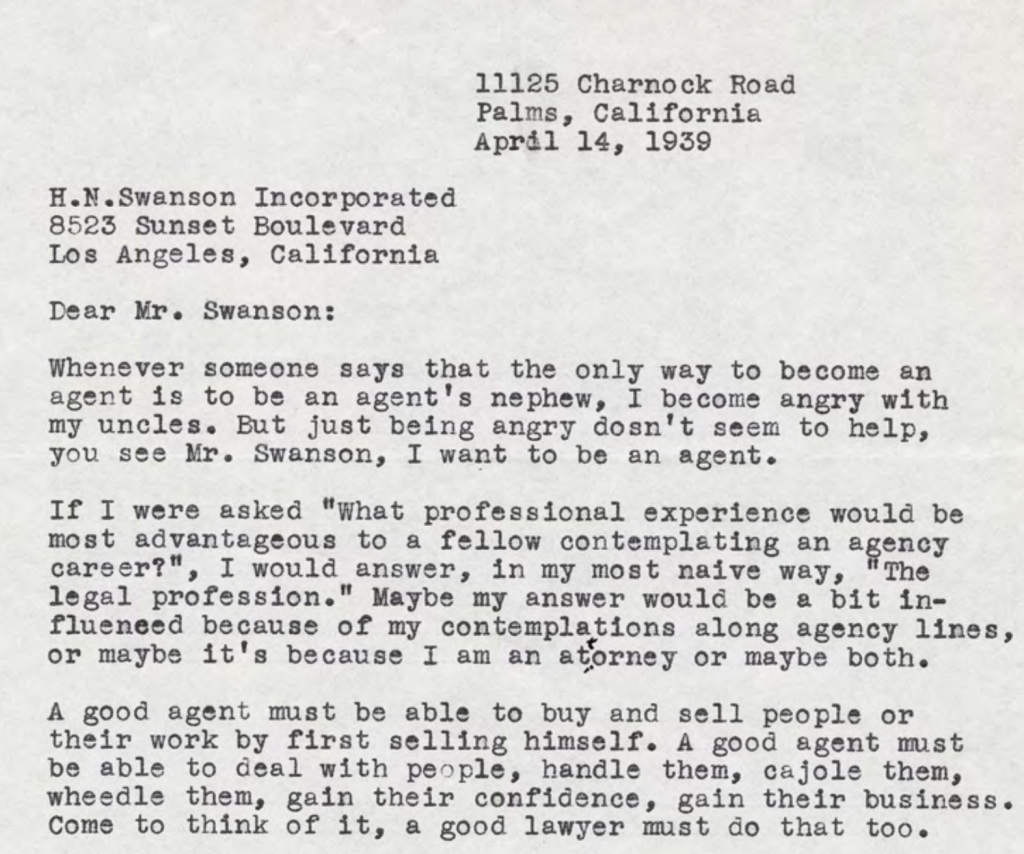 The beginning of the 1939 letter from Jennings Lang that set the book into motion. Copyright: Rocky Lang. Published with permission.

Which collections did you consult at the Library?
First, I have to give credit to Barbara Hall, who gave me a cheat sheet of where to look. Barbara is a 30-year veteran in archival research, and I like to say she knows where the bodies are buried. I looked in a lot of collections at the Library, including the Hume Cronyn and Jessica Tandy papers and the papers of Rouben Mamoulian, Groucho Marx, Bob Hope, Vincent Price, Ruth Gordon and Garson Kanin. Every one was filled with great letters and great history. One can get stuck in a Twilight Zone of letter reading — they can be mesmerizing.

Did you make any surprising discoveries at the Library?
The biggest surprise occurred after I finished my research for the book. I spent some time looking to see if the Library had any footage of a trip my mom, singer-actress Monica Lewis, took with Danny Kaye to Korea in 1951 to entertain troops during the Korean War. I was surprised to find there was quite a lot of footage, some of which showed my mom and Danny Kaye onstage with shots of troops and life behind the lines. (You can see my mom at minutes 1:56 and 2:24 in the link.) I can tell you it was a very surprising and worthwhile find.

Did your research change your view of Hollywood in any way?
I don’t believe it did. I have spent my life in Hollywood as a producer, writer and director. Although I am not a historian or archivist, I have experienced the world, the characters, the egos, the passions, the emotional commitment to the work and just about everything else. The letters we chose show for the most part the best part of the men and women who built Hollywood, but we also show its dark side. In one letter, for example, silent film comedian Roscoe “Fatty” Arbuckle writes to mogul Joseph M. Schenck after Arbuckle was arrested for the murder of model and wannabe actress Virginia Rappe. Arbuckle was acquitted, but the scandal ruined his career and changed the way Hollywood was perceived by the public. 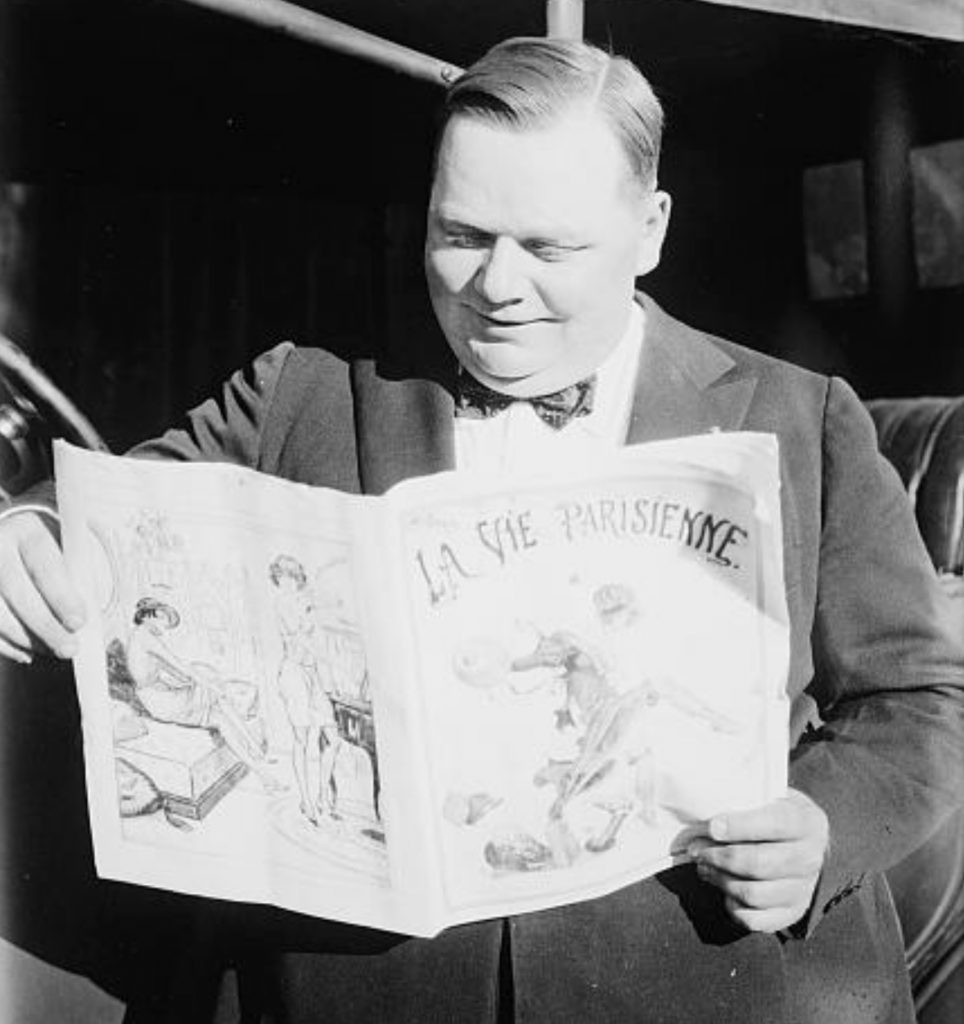 Can you comment on the Library as a venue for research?
Barbara and I went to many libraries and archives. For me, the Library of Congress was one of the best. The staff was very helpful and supportive. And of course, the main reading room in the Thomas Jefferson Building is absolutely stunningly beautiful. Sometimes I found it hard to concentrate surrounded by all that grandeur, history and sheer magnificence.