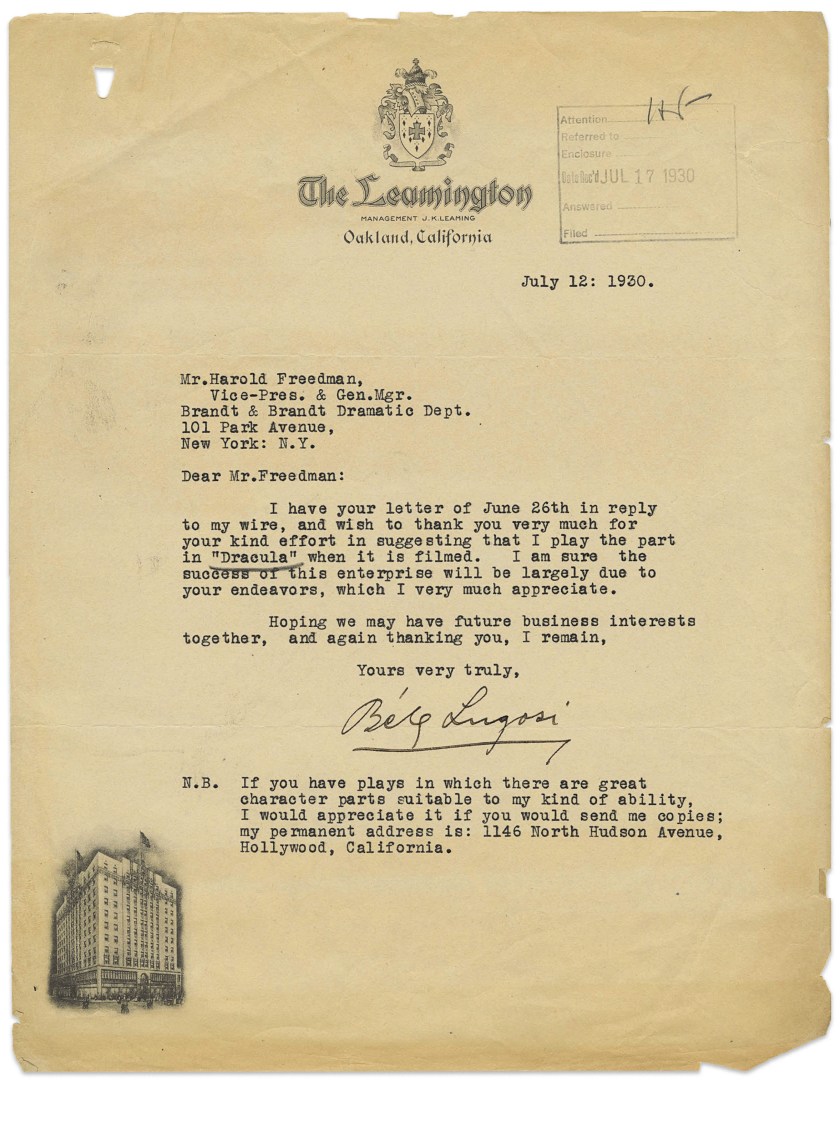 Actor Bela Lugosi’s lobbying efforts for a role that would make him a legend in 1931’s “Dracula,” in “Letters From Hollywood.”
(Abrams)

“Dear Fly in the Ointment. Because I always open my wife’s mail, I read your insidious and immoral proposals to my wife…”

So begins Humphrey Bogart’s 1952 letter to director (and friend) John Huston about Lauren Bacall. It’s one of the 135 letters, memos and telegrams in a new Hollywood time capsule culled from libraries, archives, and personal collections.

Readers learn that Joan Crawford loved to write letters to friends and fans.

The book includes her handwritten 1956 note to Hollywood biographer and novelist Jane Kesner Ardmore about a royal premiere in London. After gushing about meeting Queen Elizabeth, Crawford included a few jabs at sex symbols Marilyn Monroe and Anita Ekberg.

“I was presented to the Queen last night — nearly died of excitement and fear,” Crawford wrote. “Of course, I was not too happy about being presented with that group of people representing the Motion Picture Industry, such as Marilyn you-know-who, and Anita Ekberg. Incidentally, Marilyn and Anita were howled at because of their tight dresses — they could not walk off the stage. It was most embarrassing.”

Lang and Hall provide images and historical context for each letter.

“We tried to have a lot of different types of letters in the book and sort of strike a balance between letters that are sort of about personal relationship between people and then letters that are about the making of the film,” said Hall, the archivist at the Art Directors Guild. She previously worked at the Academy of Motion Picture Arts and Sciences.

Lang, a producer of “White Squall” and other films, said he became inspired to do the book after receiving a 2015 letter from Howard Prouty, acquisitions archivist at the academy.

His dad wanted a job with Swanson: “Ten minutes with a young personable attorney with years of experience of drama and screen criticism experience, and with a living desire to imitate you and your position might not prove boring. Please see me?”

Lang shares the back story: “He was 24 years old and had 50 bucks in his pocket, he had just arrived in Los Angeles and wanted to be an agent. In that letter I could see my dad’s heart and soul, his humor and his bossiness. It was incredibly moving.”

After a lunch with Prouty and a tour of the academy’s Margaret Herrick Library archives, Lang knew he had a great subject for a book. And it was Prouty who suggested Hall as a partner on the project.

“Barbara brought this sort of library science to finding these letters and then even giving me road maps that looked like treasure hunts when I would go across the country to archives looking for letters,” Lang said.

Neither realized how difficult it would be to find, acquire and get permission to use the letters.

They searched archives at UCLA, AFI, the academy, the Harry Ransom Center at the University of Texas, the Library of Congress and the Kennedy Library at Boston University. They reached out to auction houses and families with personal collections.

Lang even hired private detective David Gurvitz to track down relatives for permission to publish the letters. “The copyright was with the writer, not the receiver,” he said.

The pair hit a dead end tracking an heir after Hall found a letter actor Gilbert Roland wrote to costar Clara Bow years after the “The Plastic Age.” The private eye, however, quickly located Roland’s daughter — who lived just 10 minutes from Lang.

Gilbert had sent a December 1949 letter to Bow, who struggled with mental issues, while she was in a psychiatric hospital.

“I hope the treatments there alleviate your illness…. I will go to church and pray for that. How is your Dad? I would like to see him. I always had a warm spot in my heart for him, even though many years ago he refused to let me marry you because I was making seventy-five dollars a week and you were three hundred … and so it goes and that’s the way it is.”

“About four weeks ago, when he returned from Florida, Coop was out washing the car, swimming, etc. Because the doctors feared that the pneumonia might set in, the family and the doctor told him for the first time. I must say that I have never known anyone to be as brave as ‘The Marshal.’”

“He has made his peace — never brings up the subject, gets up two or three times during the day, watches television, and then back to bed where they ease his pain with various strong drugs. I have seen him practically every day. We talk as if there is no tomorrow.”

Lang said “Letters From Hollywood” became a passion project that has forged a connection with the families of Hollywood legends.

“They lived in the shadows of these icons and they saw this big life,” he said. “Now they have this community of each other who are now connected through this book. “