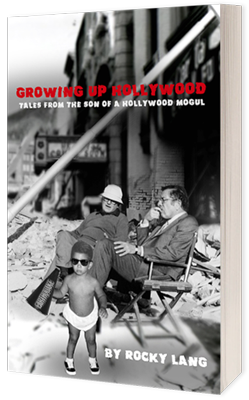 Growing Up Hollywood – Tales From The Son of a Hollywood Mogul

The genesis of “Growing Up Hollywood – Tales From The Son of A Hollywood Mogul”, started when a friend asked me to tell other friends about the time when a crazy  Academy Award winning producer tried to shoot my dad in the balls.  Thank you very much…he missed, and I was born.

What really goes on behind the veil of celebrity? Rocky Lang, who grew up in the 90210 as the son of mega-producer and screen disaster master Jennings Lang (Earthquake, the Airport movies and 35 other features), dishes all in his new book, Growing Up Hollywood: Tales from the Son of a Hollywood Mogul (HLPI Books, $7.95, November 2014). Raised around the likes of Steven Spielberg, Clint Eastwood, Walter Matthau and Billy Wilder, Lang serves up—in self-deprecating style—a genuine insider’s collection of bizarre, sometimes ribald, often hilarious and always surprising true tales from the rarefied world of Hollywood, such as: