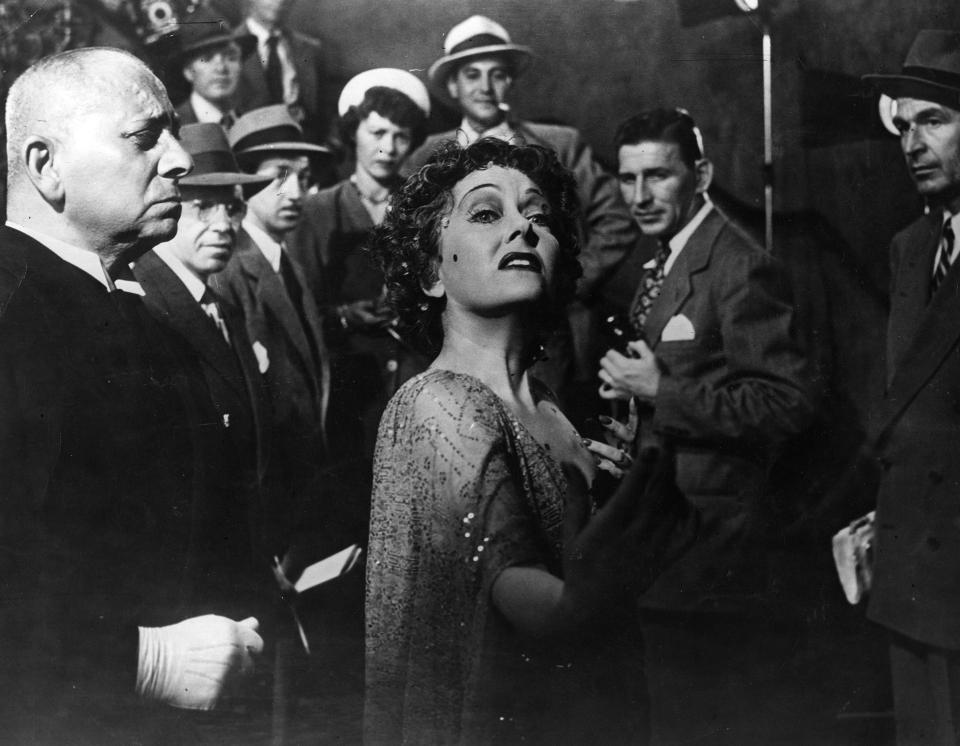 Filmmaker and author Rocky Lang has spent his life in Hollywood. The son of veteran producer and MCA/Universal executive Jennings Lang and stage and screen star Monica Lewis, he can tell childhood stories of hanging out with Steven Spielberg and playing tennis with Clint Eastwood. Then there’s that time he couldn’t sleep during one of his parents’ parties.

“I woke up in the middle of the night, came to the kitchen and there the Beatles were sitting around at the table with Barbra Streisand drinking milk and eating cookies,” explained Lang during a 2014 podcast conversation with me.

Stocked with fond memories that could fill a Who’s Who rolodex in show business, Lang had no plans to dig deeper into old Hollywood until three years ago when two letters changed everything. Contacted in a letter by Howard Prouty, the acquisitions archivist at the Academy of Motion Picture Arts and Sciences’ Margaret Herrick Library, Lang was thrilled to also receive a copy of a 1939 job-seeking letter written by his then 24-year-old father to legendary literary agent H.N. Swanson. The senior Lang never got the job he had requested, but the letter was meaningful for his son.

“What was amazing about this letter—at 24 years old is that I saw his personality in the letter. What his soul was. What his humor was… And it was all these sort of qualities that I saw when I knew him many, many, many years later,” said Lang in a recent interview.

“So this letter really blew me away and it touched me at a very deep level. And I called Howard and took him to lunch. And at lunch he took me back to the Academy and showed me the archives. And on the way home I called my agent and I said, ‘I want to do a book called ‘Letters from Hollywood.’”

That powerful printed glimpse into his father’s life would indeed inspire Lang’s next project and eighth book, Letters from Hollywood: Inside the Private World of Classic American Moviemaking. Compiled and edited with archivist and film historian Barbara Hall after three years of research and investigation, the book features 137 letters from Hollywood royalty and influencers (chosen from thousands) with a forward by Peter Bogdanovich. 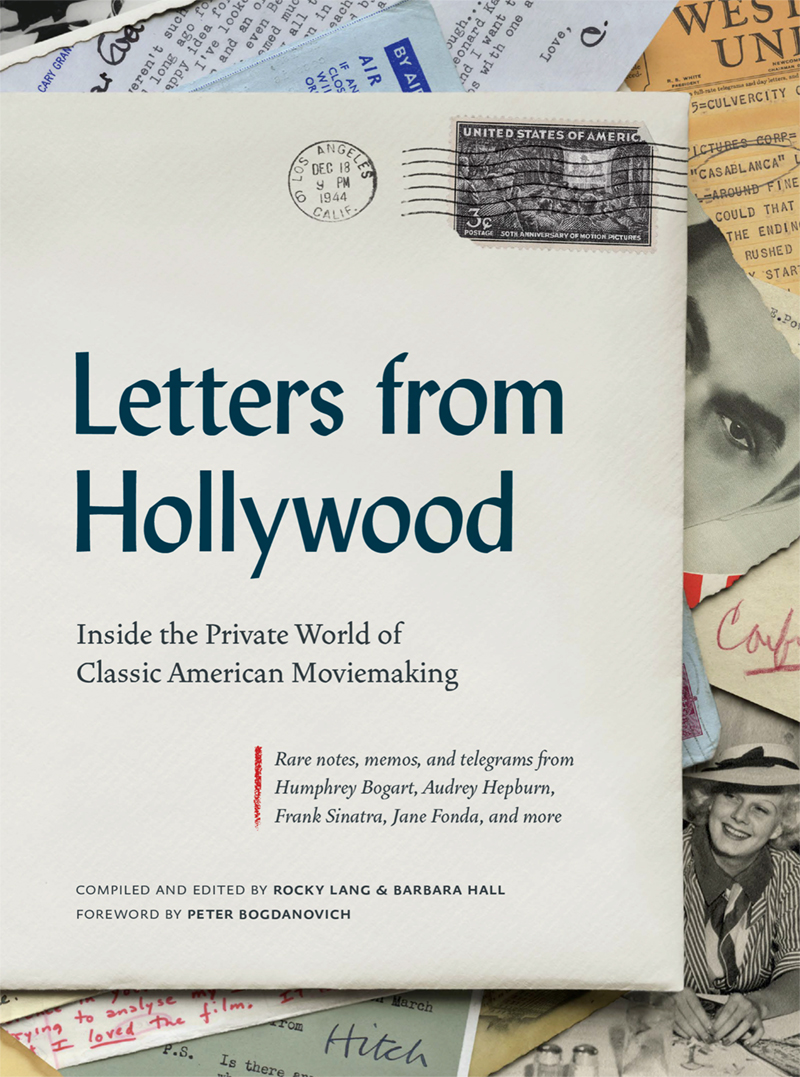 ‘Letters from Hollywood: Inside the Private World of Classic American Moviemaking (Rocky Lang and Barbara Hall)ABRAMS, THE ART OF BOOKS

Spanning more than five decades from the silent era of filmmaking to the golden age, the letters found in libraries, archives and personal collections offer insight into the industry and the personalities that fueled it. Letters from Hollywood was compiled by Lang and Hall so that readers could not only see the actual letters, but understand their messages and how they related to the film and political history of the time. Painstakingly researched and verified, the book offered plenty of discovery opportunities for its collaborators.

Said Hall, “It really appealed to me to do a book that was primarily relying on materials in archives, because I think not enough people appreciate the work that’s being done in archives and libraries to preserve our cultural heritage, in this sense, specifically our film heritage.”

Letters from Hollywood captures the essence and nuances of classic Hollywood. It was a time when directors like John Huston and stars like Gloria Swanson, Tallulah Bankhead and Shelley Winters revealed their passion for specific projects and roles and attended to the details.

In a 1951 letter to Katherine Hepburn, who was slated to star in his upcoming film The African Queen, Huston discusses her costumes and adds two rough sketches in the margins.

And Winters’ 1957 letter asks director George Stevens to consider her for the role of Mrs. Van Daan in The Diary of Ann Frank. Winters would later win an Academy Award for that portrayal.

Tallulah Bankhead’s 1936 letter to Gone with the Wind producer David O. Selznick hadn’t been as effective. Bankhead’s desire to play Scarlett O’Hara is evident from her writing, as is her frustration with the apparent runaround she got from the casting decision makers. In the end, Vivien Leigh was given the role of Scarlett. From the tone of Bankhead’s letter, one might guess that by the time the waiting game was over, Bankhead probably didn’t give a damn.

Letters from Hollywood reminds us of how times have changed in Hollywood. Says Lang, “I think that you see in the letters this passion for material, and passion for character and passion for storytelling. And it was a time where the original idea was valued, or the writer coming up with something out of nothing, facing a blank page, creating something today that didn’t exist yesterday. There was a lot of that. It didn’t mean that there weren’t great movies made from books like Gone with the Wind or The Best Years of Our Lives. I mean, these are fantastic films. They were made from fantastic books and we still do that today. But today it’s more about branding material…studios are now looking for not necessarily what the best idea is or the best script is, it’s more of like, ‘How can we sell this project?’ And I think that in the old days, the studio heads and the great producers were people who were like, ‘Hey, you know what, if I like this, other people are gonna like this. They sort of just relied on their gut and it wasn’t like, ‘Okay, let’s send this out for research. Let’s send this out and have 10 people look at it. Let’s now come back with the writer with notes from 10 people.”

Besides the business, Letters from Hollywood highlights the friendships and gratitude that evolved from the process of filmmaking including Greta Garbo’s 1938 Western Union message to friend and actress Marion Davies (longtime mistress of William Randolph Hearst) asking for help from the hounding press she couldn’t shake.

There is Ingrid Bergman’s 1957 letter to Cary Grant for so sweetly accepting her Academy Award in her absence, and filmmaker Sidney Lumet’s 1963 correspondence with Katherine Hepburn during her time caring for actor Spencer Tracy during his illness.

Legendary actors also set the stage by setting some limits or pushing the limits as evidenced in a 1939 letter to Jack L. Warner from Bette Davis requesting time off between pictures and reminding him that she didn’t wish to speak with him.

Of course gossip is nothing new in Hollywood. But if you need a dose of Marilyn Monroe gossip, Joan Crawford’s 1956 letter to friend and biographer Jane Kesner Ardmore offers up a tiny tidbit as she fills her friend in on the fact that she didn’t like being associated with Marilyn “you-know-who” Monroe and Anita Ekberg in their too tight dresses as they were presented to the Queen of England.

Dreams are often captured by the written word and those letters didn’t escape Lang and Hall. From Jennings Lang’s 1939 job hunting letter that started it all to the 1974 correspondence between acting hopeful Thomas Hanks* and Academy Award-winning director George Roy Hill, Letters from Hollywood showcases the dream and the reality in poignant print and beautiful photos.

*Yes, that was future Academy Award winner Tom Hanks. The 17-year-old wrote his humor-filled letter to the director on notebook paper. And Hill’s typed response to Hanks is laugh out loud funny.