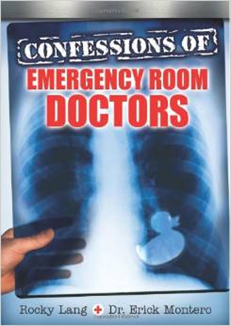 Rocky Lang and Dr. Erick Montero offer up more than 200 firsthand accounts of emergency room dramas along with bizarre and insightful medical facts and stats inside Confessions of Emergency Room Doctors. Sample entries include: * Strange Disease Fact: A melcryptovestimentaphilliac is someone who compulsively steals ladies underwear. *

Dr. Brown, Chicago Hospital, writes: “A woman came into the ER, ready to give birth, followed by her husband and about ten kids. Their last name was King. We took her to the operating room and soon I came out and announced that he was the proud father of a baby boy–I told him his wife said that he should name the little one. Mr. King scratched his head and said, “Gee I just don’t know, I’ve just about used up all the names I can think of.” He glanced up at a sign that read, “No Smoking.” “That’s it,” he says, “I’ll name him Nosmo–Nosmo King.”